Do you remember what happened in 2006?

• Crash won the Oscar for Best Picture
• The Pittsburgh Steelers won the Super Bowl
• The Chicago Cubs did not win the World Series (or even make it to the playoffs.)

It’s OK if you don’t remember - nobody remembers these things.  People get excited in the weeks leading up to the playoffs and the award ceremonies; they spend a couple of weeks anxiously cheering for their favorites, then all is forgotten (except for the Cubs thing – we’ve been mourning that one for over 100 years).

But something else occurred 10 years ago that we haven’t forgotten.  Ten years ago one of Glenview’s very own got it in her head the Glenview Public Library needed a used book store.

If you remember, ten years ago we were still in the old library building…


Who in their right mind would consider trying to open a used book store in that old building?

The first problem was space - most people would have assumed there was no space for such a thing in the old library.  But Irene Kreer is not most people.

Irene pitched the idea for a used book store to Vickie Novak (our Library Director) and the two of them walked through the old library.  They found a little unused space on the mezzanine level.  It was an odd space – so odd the library staff hadn’t found a use for it in 50 years.  But Irene saw the potential and her enthusiasm was contagious.


Again, Irene was not deterred.  And now she had an accomplice…

Irene and Vickie make a good team.  Vickie went into research mode and soon found some free shelving.  Irene rounded up some volunteers to pick up the shelving and install it in the little nook in the library.

Word of the new experiment spread.  Used books were donated and volunteers appeared out of nowhere.  The used book store officially opened on July 17, 2006. 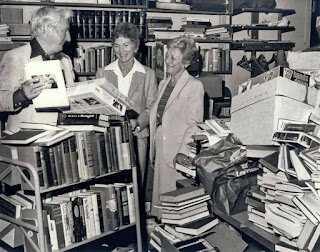 The used book store now occupies the southwest corner of the new library building.  Irene continues to manage the book store and coordinate over 60 volunteers who keep the book store open during all regular library hours.

In April of this year, the Glenview Library Board of Trustees honored Irene for her 50+ years of service to the library.  During the celebration ceremony they gave Irene the ultimate tribute – they renamed the book store after her.


Please visit us in the Irene Overman Kreer Used Book Store – our inventory is constantly changing due to the donations of our generous neighbors.

Posted by Friends of the Glenview Public Library at 12:13 PM

About the Friends of the Glenview Library

The Friends of the Glenview Library is organized exclusively for the charitable, educational, and continuing development of the Glenview Public Library. Proceeds generated by the Friends are used to purchase important items not possible in the Library's regular operating budget, as well as to support special projects.